Inversion Tarot is based on and inspired by the mid-century artwork originally created in 1960 by Paul Mathison for the Rolla Nordic Tarot. This deck follows the ancient Marseille tarot tradition. The updated images have been inverted and refined with interesting new details and decorative elements brought into focus for a striking, contemporary deck.

The pocket-sized deck includes 78 black and white cards and 64-page booklet in a handy tin. The booklet includes instructions for two tarot spreads.

Jody Boginski Barbessi is an artist and graphic designer. She studied fine arts at the Pratt Institute in Brooklyn, NY, the school Pamela Colman Smith attended before illustrating the Rider-Waite Tarot deck. Jody is also is the creator of Influence of the Angels Tarot.

The brass taper holder is compact and elegant with a decidedly witchy shape. I ordered a matched pair for my main altar, on which I have a gold table fabric, so the brass and gold really look great together. Thank you to 13 Moons for stocking such attractive, useful items. They know us well. 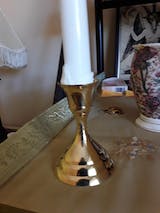 I began using Fast Luck Oil from 13 Moons during a waxing Moon cycle. About a week later, I received a response from a job application I had made weeks earlier. It wasn't an immediate hire, but I was invited to audition for the job by writing an 800-word essay in the field of historical literature, which as a newly minted Ph.D., is one of my academic specialties. I have not yet heard back on this, but I felt like the Fast Luck Oil certainly helped materialize the opportunity to audition. That alone was the opening of a door. Before using the Fast Luck Oil, I hadn't heard anything on that job application for weeks. I'm continuing to use Fast Luck Oil. It has an intriguing fragrance, possibly a cross between earthy and floral, though it is not sharply sweet. I like it quite a bit. Whenever I wear it and catch a wiff of it, I know something good is on the way. Fast Luck Oil is working for me. The fragrance is suitable for both the gods and goddesses among us, which is to say, for both men and women.

Its an eternal relic of great symbology. I can not tell how important it is too me and the freemasonry. I am graced and honored. Many thanks for your availability of it

I love this beautiful statue and honor to the Earth! Elen looks at home in our place and I'm so happy!