The Orishas, Goddesses and Voodoo Queens

An inspiring exploration of the goddesses of the West African spiritual traditions and their role in shaping Yoruba (Ifa), Santeria, Haitian Vodoun, and New Orleans Voodoo.

Throughout Africa and beyond in the diaspora caused by the slave trade, the divine feminine was revered in the forms of goddesses like the ancient Nana Buluku, water spirits like Yemaya, Oshun, and Mami Wata, and the warrior Oya. The power of these goddesses and spirit beings has taken root in the West. New Orleans, for example, is the home of Marie Laveau, who used her magical powers to become the “Voodoo Queen” of New Orleans.

Orishas, Goddesses, and Voodoo Queens shows you how to celebrate and cultivate the traits of these goddesses, drawing upon their strengths to empower your own life. In addition to offering a guided tour of the key goddesses of the African religious traditions, the book offers magical spells, rituals, potions, astrological correspondences, sacred offerings, and much more to help guide you on your own transformational journey.

“In Orishas, Goddesses, and Voodoo Queens, Lilith Dorsey takes readers on an exploratory journey of a beautiful religious current, examining its history, evolution, and even its most complex and uncomfortable aspects, such as slavery, syncretism, and cultural prejudices. The book also includes the most curious recipes and interesting anecdotes, all summed up in one accessible read.” - Elhoim Leafar, author of The Magical Art of Crafting Charm Bags.

"Anyone who explores the many witch traditions has their must-have-go-to book. Well, Orishas, Goddesses, and Voodoo Queens will become that book for many of you, whatever path or tradition you follow. Packed with rare insight, recipes, and extensive lore regarding each orisha and deity of the African and Caribbean paths, it discusses how they affected our lives in the past and present-day and how to effectively work with them. It's about darn time; this is much needed. Lilith Dorsey has written a must-read primer for anyone interested in learning about the many Dark Goddesses. You’ve got to read this book and learn from one of the best. This will become one of our go-to books at the Academy" — Starr RavenHawk, founder of the New York City Wiccan Family Temple, the WFT Academy of Pagan Studies, and WitchsFest USA. 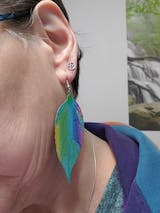